Ride with young Milo through the phantom tollbooth in a magical musical tale of warring kingdoms (one favors words, the other numbers), fabulously weird creatures, demons, princesses and a tick-tick-ticking dog named Tock. He's a watchdog, you see! 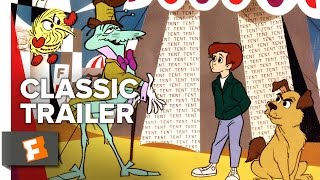 What could possibly be inside that gigantic, wrapped-and-ribboned box? A tollbooth, a toy car... and adventure! Ride with young Milo through the phantom tollbooth and into a world that combines the enchantment of Norton Juster's classic children's book with sheer visual joy spearheaded by animation immortal Chuck Jones. Bookended by live-action sequences and featuring a stellar voice cast, The Phantom Tollbooth engages youngsters' minds and imaginations in a magical musical tale of warring kingdoms (one favors words, the other numbers), fabulously weird creatures, demons, princesses and a tick-tick-ticking dog named Tock. He's a watchdog, you see!

Looney Tunes director Chuck Jones lets his imagination fly with this full-length mixture of live action and animation based on the classic story by Norton Juster. Milo, a bored child (Butch Patrick) in San Francisco, takes a mysterious journey through the titular phone booth and arrives in an animated fantasy land run by feuding numbers and letters. He meets all sorts of peculiar characters and joins forces with a "watch" dog named Tock and a lovable old coot called Humbug. Together they must restore order to the Land of Wisdom by rescuing the Princesses Rhyme and Reason, who are being held captive in a midair castle. Along the way, they run into the Doldroms, Alphabet City, a strange giant/short/thin/fat man, and even a "point of view." It's a land of bizarre puns and symbols, and it's up to the child to concentrate, learn the lessons, and save the day. Mel Blanc, Dudley Moore, and Paul Henreid lend their vocal talents to this unique and successful blend of live action, animation, and songs.

An unfocused young boy discovers new interests when he passes through a mysterious tollbooth into an animated world where numbers are at war with letters. Accompanied by a "watch" dog and a Humbug, he visits Alphabet City and meets a giant/midget/fat man/thin man, among other things, before setting off on a quest to restore order to the Land of Wisdom. Mel Blanc, Dudley Moore, and Paul Henreid provide the voices while Chuck (Looney Tunes) Jones directs this educational blend of live action, animation, and song.

Fantasy | Kids Adventure
This product is made-on-demand by the manufacturer using DVD-R recordable media. Almost all DVD players can play DVD-Rs (except for some older models made before 2000) - please consult your owner's manual for formats compatible with your player. These DVD-Rs may not play on all computers or DVD player/recorders. To address this, the manufacturer recommends viewing this product on a DVD player that does not have recording capability.