To Sir, With Love II

1.2K ratings
Currently Out of Stock: We'll get more as soon as possible
Notify Me When Available
Add to Wishlist
Format:  DVD-R
item number:  FEY4
91% recommend us! 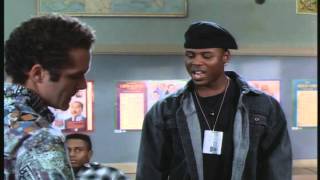 To Sir with Love II (Clip)

In this sequel to the 1967 classic, Mr. Thackeray (Sidney Poitier) retires from teaching at a working-class London school and takes a job teaching at a to tough school in Chicago's notorious South Side. Once in Chicago he confronts immense challenges as he deals with his new and unruly students and comes face-to-face with his former lover.

This made-for-TV sequel to the 1968 theatrical feature TO SIR WITH LOVE stars Sidney Poitier, recreating his role as Mark Thackery, an American-born schoolteacher who in the original film had taken a post in a tough East Side London neighborhood. Thirty years have passed, and Thackery has been forcibly retired, much to the dismay of the thousands of underprivileged students both past and present who have grown to love him. Although he has received several offers to teach in America's most prestigious universities, Thackeray chooses instead to start his career all over again, teaching so-called "incorrigible" students at an inner-city Chicago school presided over by cynical, weak-willed principal Horace Weaver (Daniel J. Travanti). Anyone who has seen the original TO SIR WITH LOVE can pretty much guess the outcome of the sequel, though a subplot involving Thackeray's search for a lost love is less easy to second-guess. In addition to Sidney Poitier, actresses Lulu and Judy Geeson appear in brief cameos as the now grown-up characters they played in the 1968 film. Directed by Peter Bogdanovich, TO SIR, WITH LOVE II first aired April 7, 1996 on CBS.

Teachers | High School Experiences
This product is made-on-demand by the manufacturer using DVD-R recordable media. Almost all DVD players can play DVD-Rs (except for some older models made before 2000) - please consult your owner's manual for formats compatible with your player. These DVD-Rs may not play on all computers or DVD player/recorders. To address this, the manufacturer recommends viewing this product on a DVD player that does not have recording capability.