Fencing is a science. Loving is a passion. Duelling is an obsession. 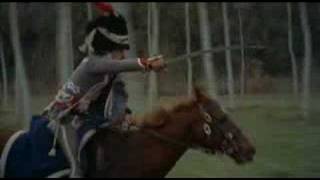 "To the surprise and admiration of their fellows, two officers, like insane artists, trying to gild refined gold or paint the lily, pursued a private contest through the years of universal carnage." Thus wrote Joseph Conrad in the opening paragraphs of the story that provides the basis for Ridley Scott's first feature. During the era of the Napoleonic wars, a conflict arises between two of the emperor's cavalry officers when one of them, the aristocratic Lt. D'Hubert (Keith Carradine), is sent by his superior to deliver the message to commoner Lt. Ferraud (Harvey Keitel) that he's to be placed under house arrest for having wounded a man in another duel. Since Ferraud is with a woman at the time, he takes offense at the intrusion and challenges D'Hubert to a duel. Their match, though fierce, is without resolution. Whenever their paths cross, they continue their battle, fighting a series of six duels over the course of 14 years, paralleling Napoleon's major battles of the period. Scott's meditation focuses on the absurd vanity behind the old European code of honor--and the nature of warfare itself. All the distinguishing marks of Scott's later work is already on display here, from the meticulous re-creation of period costume, decor, and behavior to the lush, carefully composed photography.

16%off
The Count of Monte Cristo
$8.40 Super Savings
Add to Cart