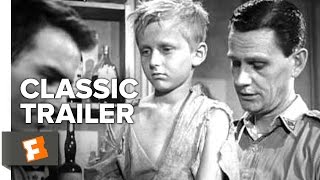 In post-World War II Germany, a small boy who survived Auschwitz wanders alone - feral, mute and terrified. He finds a makeshift home with a big-hearted GI, while the mother he does not remember searches desperately for him. Starring a then-unknown Montgomery Clift in his movie debut, directed in a near-documentary style by Fred Zinnemann and filmed in the ragged, rubble-strewn skeleton of Nuremberg, The Search vividly captures the horrifying human cost of war. This milestone of filmmaking won two 1948 Academy Awards®: Best Motion Picture Story and a special award to Ivan Jandl for his haunting performance as the lost child.

In Montgomery Clift's first released film, he plays Ralph Stevenson, an American G.I., on assignment in Germany directly after World War II. While driving in his jeep, he spots a displaced, starving youngster and entices him to his quarters with food. Stevenson and the boy, Karel, develop a close father-son bond. However, it is discovered that Karel's mother is still alive and looking for him amid the rubble of Europe. Just as Stevenson is getting the papers together to legally adopt Karel and take him back to America, mother and son find each other...

20%off
Judgment at Nuremberg
$20 Super Savings
Add to Cart