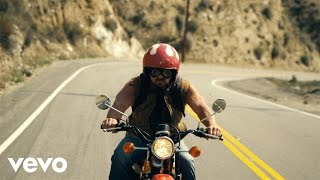 Nickelback - Get 'Em Up (Music Video)

Always a tad bit cleverer than he's ever given credit for, Chad Kroeger is perfectly aware not only of his encroaching middle age but also the shifting commercial marketplace and where Nickelback fit within that. No Fixed Address, Nickelback's eighth album and by some measure their most adventurous record, doesn't find Kroeger abandoning his gift for brutish hooks, but he has moved his band away from its reliance on Paleozoic power chords. This is entirely a production move. He writes the same kinds of songs, but he's swapped out canned digital distortion for burbling cauldrons of EDM, looping rhythms so it appears they overlap (although he never hints at anything like a polyrhythm), ladling synthesizers into every empty crevice, carving out space for Flo Rida on "Got Me Runnin' Round," and going full-bore disco on "Get 'Em Up" and "She Keeps Me Up." The barely disguised double-entendre joke in that latter title shows Kroeger still finds smuttiness irresistible -- and he can still find fresh new ways to be grotesque, as when he slips "you were busy motorboating on that blonde girl" into "Got Me Runnin' Round" -- but this isn't his default mode: he'd rather layer on the sentiment, illustrated in both the power ballad "Satellite" and "Miss You," which could easily be mistaken for adult contemporary pop from Y2K, and he even attempts something of a political stance on "Edge of a Revolution," where the asides to the NSA are muddled but appreciated. Bizarrely enough, in this context all the electronic flirtation doesn't sound craven but rather crafty. With a decade of hitmaking under his belt, he knows what keeps a song on the top of the charts -- and he knows what is currently on the charts, as evidenced by the Imagine Dragons/Kongos stomp fueling the closing "Sister Sin" -- so he's shifting his band away from its antiquated post-grunge into a sound that is self-consciously fresher and mature. It's not only a commercially canny move, it generates the best Nickelback record to date. ~ Stephen Thomas Erlewine

Nickelback
All The Right Reasons
$9.49 on Sale
Add to Cart

Nickelback
All the Right Reasons
$12.98 on Sale
Add to Cart

53%off
Nickelback
Maximum Nickelback (CD)
$6.98 on Sale
Add to Cart

53%off
Nickelback
Maximum Nickelback
$6.98 on Sale
Add to Cart

Nickelback
All The Right Reasons
$9.49 on Sale
Add to Cart

60%off
Nickelback
Unauthorized
$3.98 on Sale
Add to Cart