The Valley of Decision

The Book That Thrilled Millions! 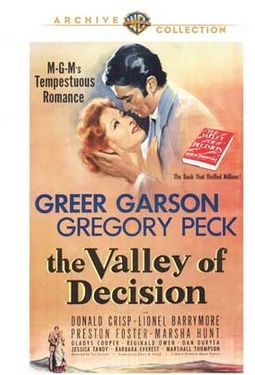 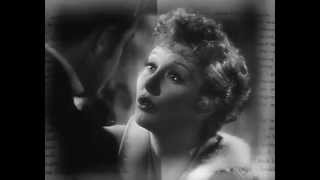 Steel separates 1873 Pittsburgh into rich and poor, master and worker, powerful and powerless. On one side is Paul Scott, the progressive son of a steel mill owner. On the other is Mary Rafferty, daughter of an embittered laborer who was crippled in a mill accident. When Mary takes a post as housemaid at the Scott mansion, she and Paul fall desperately in love. But a bloody strike may tear the city -- and the lovers -- apart.

Surging with passion and strife, featuring a commanding cast that includes Greer Garson, Lionel Barrymore and Gregory Peck (the relative newcomer created a sensation as the romantic, intense Paul), The Valley of Decision is a prime example of prestige filmmaking during Hollywood's Golden Age.

Romance knows no class boundaries as the son of a wealthy mine owner falls in love with his family's maid. As always, there's a catch--the girl's father and brother were killed in the mine. Based on Marcia Davenport's 1942 novel. Academy Award Nominations: 2, including Best Actress Greer Garson.

This adaptation of Marcia Davenport's romantic novel tells the story of Mary Rafferty, a young Irish woman who works as a maid for the wealthy Scott family. Although the clan has become rich through the steel mine they own in Pittsburgh, they face many problems over the years -- many of which Mary helps them solve. In time, she becomes just like a member of the family, but never stops dreaming that one day she will win the love of Paul, the patriarch's son...

The Farmer's Daughter
$19
Add to Cart

Since You Went Away
$19
Add to Cart