A Harley Roadster, a bedroll, a lonely stretch of highway: Jim Bronson is traveling where the road and the day take him. Temple Brooks is a runway bride just as adrift as Jim is. Together, they'll ride that Harley all the way to New Orleans. 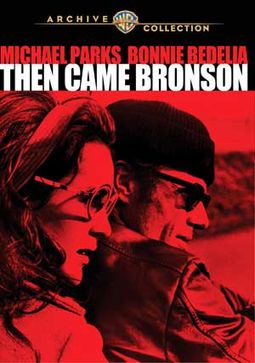 A Harley Roadster, a bedroll, a lonely stretch of highway: Jim Bronson (Michael Parks) is traveling where the road and the day take him, trying to make sense of things after the suicide of his close friend. He doesn't go far along a magnificent stretch of California's coastal Big Sur before he meets Temple Brooks (Bonnie Bedelia), a runway bride just as adrift as Jim is. Together, they'll ride that Harley all the way to New Orleans. Together, they might find what they're looking for.

The pilot film for the same-titled 26-episode TV series, Then Came Bronson - seen here in an international version with footage not seen in U.S. telecasts - came along in the free-wheeling era of Easy Rider. Hop on.

This pilot film for the 1969-1970 TV series THEN CAME BRONSON stars Michael Parks in the title role. A young, ambitious journalist, Bronson realigns his priorities after his best friend (Martin Sheen) commits suicide. Borrowing a page from Kerouac, Bronson gives up the rat race for the road. He mounts his friend's motorcycle, speeding up and down the California coastline in search of life's meaning. Along the way, he meets a runaway bride (Bonnie Bedelia) who briefly joins him on his odyssey. The best sequence takes place in a nomad encampment, presided over by Zorba-like Akim Tamiroff. Everyone who grew up in the late-'60s seems to have fond memories of the series; why, then, was the show canceled after only one season'

Reporters | Motorcycles | Newspapers
This product is made-on-demand by the manufacturer using DVD-R recordable media. Almost all DVD players can play DVD-Rs (except for some older models made before 2000) - please consult your owner's manual for formats compatible with your player. These DVD-Rs may not play on all computers or DVD player/recorders. To address this, the manufacturer recommends viewing this product on a DVD player that does not have recording capability.

The Glory Stompers
$19
Add to Cart