Glenn Ford and Henry Fonda portray a pair of bromc riders who are cowboy enough to do just about any job, except for the one at hand. That job: Saddle a clever, ornery, blaze-faced roan named Old Fooler and make him as gentle as a milk-pen calf. 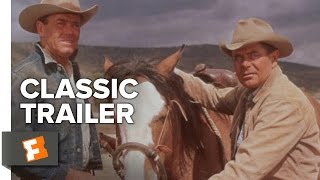 What do you call a cowboy with his brains kicked out? A bronco rider. Ben Jones and Howdy Lewis, heaven help them, are bronco riders. Glenn Ford and Henry Fonda portray the pair who are cowboy enough to do just about any job, except for the one at hand. That job: Saddle a clever, ornery, blaze-faced roan named Old Fooler and make him as gentle as a milk-pen calf. Can't be done - and that gets the cowpokes thinking maybe they can make a dollar or two by wagering that no one at the rodeo can stay atop him either. Place your bets as filmmaker Burt Kennedy matches the warmth of his two stars with an unadorned ease that makes this modern Western as welcome as a get-together with old friends at a Sunday social.

Glenn Ford and Henry Fonda join forces in ROUNDERS, a hilarious romp set in the old Southwest. Ben Jones (Glenn Ford) and Howdy Lewis (Henry Fonda) drift from town to town making a living breaking in crazed horses and wild broncos. They could be successful businessmen if only Ben didn't have such an affinity for getting into trouble. Burnt out from Western living, the two rustlers dream of immigrating to Tahiti, "where there ain't no grass, and there ain't no horses" to start their own saloon. Their goal seems attainable when they come across an ornery hiccuping horse and plan to enter it in a high-staked contest. However, when Ben gets involved with a crazed farmer's daughter (Sue Ane Langdon), it's up to Howdy to keep Ben in line long enough to ride the "bronc" to victory.

Director Burt Kennedy's box office break through, ROUNDERS is a brilliant meld of Western-esque machismo and early 1920s era slapstick. Produced during a time when Westerns were all too common, Kennedy charmed movie goers with this black comedy set in the old west. The juxtaposition of Glenn Ford and Henry Fonda as doomed rustlers demonstrates Kennedy's ingenius knack of creating compelling films around absurd and ironic scenarios (YOUNG BILLY YOUNG, SUBURBAN COMMANDO, and TROUBLE WITH SPIES are extremely bizarre and riduculous) and makes ROUNDERS an unforgettable classic.