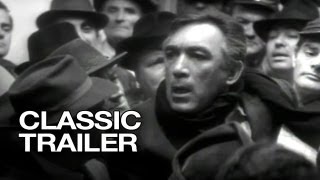 A multi-millionairess returns to the poor home town that ostracized her after her teenage pregnancy, promising to alleviate the town's massive debt in exchange for the life of the man who betrayed her.

Friedrich Durrenmatt's misanthropic theatrical piece THE VISIT has never been totally successful in any production, not even in the original Broadway presentation starring Alfred Lunt and Lynn Fontanne. The film version keeps this failure record consistent. Ingrid Bergman plays a fabulously wealthy woman who returns to her impoverished home town. Years earlier, she had been driven from town in disgrace after sleeping with solid citizen Anthony Quinn. She now offers a deal to the city elders: Bergman will alleviate the city's financial difficulties--in exchange for Quinn's life. The original play ended with the lynching of the seducer; the film ends with Bergman halting the execution, proclaiming that by allowing Quinn to live, the townsfolk will be forced to feel the pangs of guilt over what they might have done for the rest of their lives.

Psychodrama | Vengeance | Poverty | Melodrama | Satire | Revenge | Small Towns | Money
This product is made-on-demand by the manufacturer using DVD-R recordable media. Almost all DVD players can play DVD-Rs (except for some older models made before 2000) - please consult your owner's manual for formats compatible with your player. These DVD-Rs may not play on all computers or DVD player/recorders. To address this, the manufacturer recommends viewing this product on a DVD player that does not have recording capability.

Sunday Dinner for a Soldier (DVD-R)
$19
Add to Cart