Three Coins in the Fountain 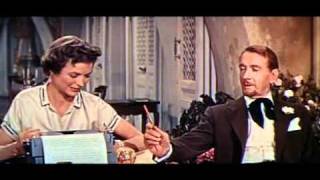 Three Coins in A Fountain trailer

Three American women (played by Dorothy McGuire, Jean Peters and Maggie McNamara) decide it's time to end their single status in romantic Italy. So they whimsically toss coins into Rome's spectacular Trevi Fountain for luck in romance. But none has the kind of luck they'd hoped for: Just as Anita (Peters) seems destined for love with a handsome translator (Rossano Brazzi), she is fired for breaking company rules against dating a co-worker; Maria (McNamara) falls for a dangerous wolf in prince's clothing (Louis Jourdan), and Miss Frances' (McGuire) only prospect for love is - well - annoying! A charming classic, Three Coins In The Fountain is a must-see for anyone who's ever taken a chance on romance.

In this handsomely photographed romance, three American women pin their hopes for love on wishes they make by tossing coins into the Fountain of Trevi in Rome. Remade in Spain as "The Pleasure Seekers," the film is based on a novel by John H. Secondari. Academy Award Nominations: 3, including Best Picture. Academy Awards: Best Cinematography (color), and Best Song ("Three Coins in the Fountain" - Jule Styne and Sammy Cahn).

3 American women living in Rome toss coins into the Fountain of Trevi -- which makes all wishes come true. And they do... but not quite in the way the women expected.