Lovers are trapped on either side of the newly fallen Iron Curtain. 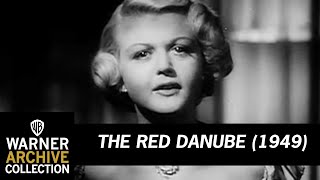 Post World War II Vienna. In a city that now lies across the river from Soviet-controlled Eastern Europe, British Major John McPhimister (Peter Lawford) works to repatriate war refugees -- to reunite families but also to sometimes force displaced people back to their native countries against their will. Now, he falls in love with beautiful ballet dancer Maria Buhlen (Janet Leigh) who is desperately trying to flee Eastern Europe. Bound by duty, honor...and love, will these two find a future together?

One of the more palatable of Hollywood's anti-communist tracts of the late 1940s-early 1950s was MGM's THE RED DANUBE. Janet Leigh plays Maria Buhlen, an Eastern Bloc ballerina who seeks political asylum in the British-occupied zone of Vienna. Maria's plight turns into a political tug-of-war involving a British colonel (Walter Pidgeon) and a Soviet colonel (Louis Calhern). Their ideological hagglings spill over into spiritualism, as represented by Mother Superior Ethel Barrymore, and romance, as personified by Maria's ardent suitor Major John McPhimister (Peter Lawford). Like earlier anti-Red cinematic exercises, THE RED DANUBE failed to connect at the box office.

Spies | Espionage | Spy | Love
This product is made-on-demand by the manufacturer using DVD-R recordable media. Almost all DVD players can play DVD-Rs (except for some older models made before 2000) - please consult your owner's manual for formats compatible with your player. These DVD-Rs may not play on all computers or DVD player/recorders. To address this, the manufacturer recommends viewing this product on a DVD player that does not have recording capability.