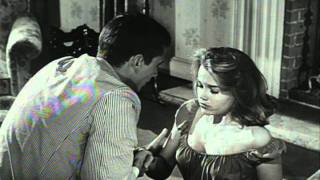 Jane Fonda wants a man she can look up to: a basketball player. In her debut movie, Fonda plays a college coed with a clear-cut goal: convince all-American hoopster Anthony Perkins that a bachelor's degree doesn't mean unmarried! From the moment the future two-time Academy Award winner spins her bicycle across campus (and headlong into two professors) to the romantic fadeout, it's clear she possesses that quality called starpower. Footlight legend and longtime Fonda family friend Joshua Logan directed this frisky farce.

Jane Fonda's film debut about a college coed who wants a man she can look up to.

A phenomenal college basketball player, Ray Blent is under a ton of pressure. To start with, he's got academic troubles up the wazoo. There's a major exam staring him in the face and he has to pass it if he wants to stay on the team. But he hasn't had time to study ever since the mob started pressuring him to throw the game against the Russians. And then there's the issue of one very pretty but extremely distracting cheerleader who seems to pop up in all his classes. But if Ray can survive this semester, he'll probably make it to the major league.