The Rich are Always with Us

The richest woman in the world has everything money can buy. But with her heart torn between her faithless husband and an ardent writer, she can't have the one thing every woman wants: happiness. 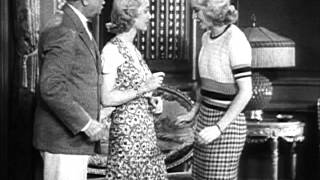 The Rich Are Always With Us - Trailer 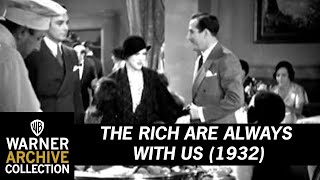 The Rich are Always with Us (Preview Clip)

The richest woman in the world (Ruth Chatterton) has everything money can buy. But with her heart torn between her faithless husband and an ardent writer (George Brent), she can't have the one thing every woman wants: happiness.

Herbert Hoover was still President and the Depression was at its most depressing when this delicious wallow in uptown romance hit the Bijou, featuring an electric performance by young Bette Davis as a society girl also enamored of the writer. This wasn't the end of Davis' relationship with Brent. They would make 11 films together, including Jezebel and Dark Victory. It wasn't the end of the Chatterton-Brent relationship, either: the on-screen lovers married soon after the film opened.

A talented cast does its best with a nonsensical script in THE RICH ARE ALWAYS WITH US. Ruth Chatterton stars as a witty socialite saddled with caddish husband John Miljan. Upon learning that Miljan has been fooling around with Adrienne Dore, Chatterton divorces him, whereupon his brokerage firm goes belly-up, for which our heroine holds herself responsible. She undergoes another guilt trip when Miljan's second wife dies in a car crash. Throughout all this, Chatterton denies herself true love in the person of foreign correspondent George Brent, who became Chatterton's husband during filming. Bette Davis enjoys an early scene-chewing opportunity as a predatory young debutante who sets her sights for the handsome Brent.

Death | Romance | Love Triangle | Melodrama | Infidelity | Marriage | Affairs | Friendships | Love Triangles | Romances | Love | Cars / Automobiles
This product is made-on-demand by the manufacturer using DVD-R recordable media. Almost all DVD players can play DVD-Rs (except for some older models made before 2000) - please consult your owner's manual for formats compatible with your player. These DVD-Rs may not play on all computers or DVD player/recorders. To address this, the manufacturer recommends viewing this product on a DVD player that does not have recording capability.

Forsaking All Others (DVD-R)
$12.20 Super Savings
Add to Cart