Trivium In The Court Of The Dragon 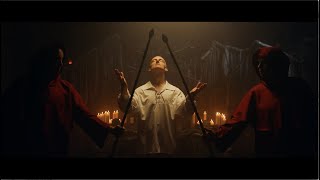 Trivium - In The Court Of The Dragon [OFFICIAL VIDEO] (Music Video)

In the Court of the Dragon is Trivium's tenth album, a milestone for any band. It's also a homecoming for the quartet of Matt Heafy (guitar/vocals), Corey Beaulieu (guitar), Paolo Gregoletto (bass), and Alex Bent (drums). Heafy returned to Florida after living in California for several years, as did Gregoletto after a period in Chicago. Produced by Josh Wilbur, this extremely musical, ten-song set aesthetically reaches forward and back simultaneously. For starters, it's simply brutal. Metalcore, thrash, and technical death metal converge throughout, with some prog metal nods, too. Wilbur's production is streamlined yet massive as it juxtaposes extreme aggression with some arena rock tendencies.
Opener "X" is a brief yet sinister interlude with chanted, wordless vocal assistance and subtle electronics from guest and Emperor frontman Ihsahn. Reverbed kick drums and animalistic sounds introduce the title track. Heafy's fire-spitting lyric delivery over the truly gnarly lead riffs by Beaulieu and slamming blastbeats from Bent unleashes a an all-out-attack we haven't heard since 2005's Ascendancy. "Like a Sword of Damocles" commences with a detuned riff before Bent picks up the tempo with blastbeats, intense rolls, and accents as the guitarists join on the main riff. The chorus follows a different tack: Using stacked vocal harmonies, it asserts an earworm hook before a series of breakdowns, solo breaks, and detuned bass crescendos claim the fore. "Feast of Fire" is radio-friendly with assonant vocals and a catchy lyric sensibility; it's couched inside a massive vamp with guitar fills that swirl around the singer as the drummer and bassist swing them into a knotty, tech death jaunt. "The Shadow of the Abattoir" moves through so many musical interactions it could be a suite. Commencing as a low, gloomy ballad, Heafy sings in his clearest baritone amid fingerpicked electric guitars and rolling tom-toms. The hooky chorus soars, but the band quickly grafts modal overtones onto the melody before the entire proceeding explodes halfway through amid thrash breakdowns and overdriven riff aggression before returning to the now-galloping chorus. "No Way Back Just Through" offers rage and a festival-ready chorus, while "Fall Into Your Hands" delivers wonderful three-part vocal harmony on the majestically hooky chorus juxtaposed against a take-no-prisoners thrash riff and spiky, wrangling guitar solos. The origins of closer "The Phalanx" lie in the Shogun era, but it's hardly filler. A grand riff intro gives way to Heafy's screaming amid angular riffing, thunderous bass fills, and jarring breakdowns. The stop-and-start segments in the middle section are unhinged. At 5:37 or so, it morphs into sweeping, midtempo power metal with orchestral strings adding ballast to the attack. As a whole, In the Court of the Dragon stands with Trivium's best work. It offers a classic meld of melodic thrash/metalcore and tech death in a sound as enormous as it is ambitious and diverse, making for wonderfully produced, flawlessly composed songs. All killer, no filler. ~ Thom Jurek

Trivium
The Sin and the Sentence
$14.50
Add to Cart

DevilDriver
Trust No One (Standard Version)
$14.50
Add to Cart