Light in the Piazza

Meg Johnson is eager to discover the glories of Italy with her beautiful daughter Clara, who was mentally impaired in a childhood accident. But Clara discovers love -- with an ardent Italian who mistakes her limitations for charming naivete. 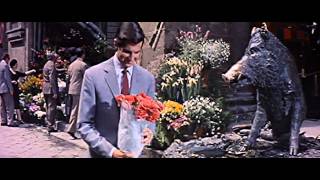 Light In The Piazza - Trailer

The Palazzo Vecchio. The Uffizi Gallery. Michelangelo's David. Meg Johnson is eager to discover the glories of Italy with her beautiful daughter Clara, who was mentally impaired in a childhood accident. But Clara discovers something more -- love -- with an ardent Italian who mistakes her limitations for charming naivete. Clara is so happy and fulfilled. Should Margaret reveal her daughter's secret?

Sensitive and elegantly romantic, Light in the Piazza is an A-list production with a fine cast headed by two-time Oscar winner Olivia de Havilland, a script by Casablanca's Julius J. Epstein, gowns by Christian Dior and color cinematography celebrating the magnificent art and architecture of Florence and Rome. Rossano Brazzi, Yvette Mimieux, George Hamilton and Barry Sullivan also star in this moving story that was also the basis for the award-winning 2005 Broadway musical.

A mother who wants only the best for her challenged daughter faces a number of new and unexpected dilemmas in this romantic drama. Margaret Johnson (Olivia de Havilland) is a wealthy woman taking a tour of Europe with her 26-year-old daughter Clara (Yvette Mimieux). Clara is blonde, beautiful, and charming, but beneath the surface lurks a serious problem -- as a result of a head injury she suffered as a child, Clara is mildly retarded and has the mental capacity of a ten-year-old. While Margaret's husband Noel (Barry Sullivan) has long contended that Clara should be institutionalized, Margaret refuses to hear of it, and she sees to it that her daughter lives as normal a life as possible. While in Italy, Margaret and Clara meet a handsome young man named Fabrizio Naccarelli (George Hamilton), the son of a prosperous local, Signor Naccarelli (Rossano Brazzi). Fabrizio is immediately smitten with Clara, and she seems equally fond of him; since Frabrizio has a spotty command of English and isn't especially perceptive to begin with, he doesn't notice anything unusual about her. Before long, Fabrizio asks Margaret for Clara's hand in marriage; while this would be a big step toward the "normal" life that Margaret has long dreamed of for her daughter, she's not sure if Clara is capable of handling the responsibilities of marriage and parenthood, and she is equally uncertain if she should reveal the nature of Clara's condition to the Naccarellis, even though she knows that it would be terribly unfair for Fabrizio to marry Clara without knowing the truth. LIGHT IN THE PIAZZA was beautifully shot on location in Italy by award-winning cinematographer Otto Heller.

Romance | Parenthood | Marriage | Physically Impaired | Italy
This product is made-on-demand by the manufacturer using DVD-R recordable media. Almost all DVD players can play DVD-Rs (except for some older models made before 2000) - please consult your owner's manual for formats compatible with your player. These DVD-Rs may not play on all computers or DVD player/recorders. To address this, the manufacturer recommends viewing this product on a DVD player that does not have recording capability.