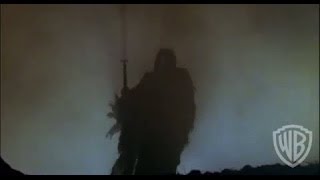 "You must remember, there's always something cleverer than yourself."
- Merlin (Nicol Williamson) to Arthur (Nigel Terry)
"It's a lonely way, you know, the way of the necromancer."
- Merlin to Morgana (Helen Mirren)
"For it is the doom of men that they forget!"
- Merlin

Director John Boorman's passionate adaptation of Sir Thomas Malory's LE MORTE D'ARTHUR stars Nigel Terry as the faithful King Arthur. Necromancer Merlin (Nicol Williamson) offers the magic sword Excalibur to the warlike Uther Pendragon (Gabriel Byrne) in exchange for a promise that he'll make peace with his enemy, the duke of Cornwall (Corin Redgrave). He agrees but breaks his word after catching sight of Cornwall's wife, Igraine (Katrine Boorman). With the magician's help he makes love to the woman in the guise of her husband. She bears a child, Arthur, who is taken by Merlin as payment for his assistance and left in the care of Ector (Clive Swift). Years pass, and the boy, now a humble squire, pulls Excalibur from the stone in which Uther had sunk it--a task no other could accomplish. With Merlin's counsel, he marries the stunning Guenevere (Cherie Lunghi), finds a champion in Sir Lancelot (Nicholas Clay), subdues the skirmishing knights, and builds the Round Table to unite them. Yet his half-sister, Morgana (Helen Mirren), lurks in the shadows, preparing to poison her brother's reign. Perhaps the best film made in this genre, EXCALIBUR benefits from an extraordinary cast, including appearances by Byrne, Patrick Stewart, and Liam Neeson early in their celluloid careers. Counterpointing ethereally filtered sex scenes against scenes of graphic blood-and-guts swordplay, Boorman's sumptuous production galvanizes the familiar mythology, as he charts the transition from an age of magic to one of reason.

John Boorman brings the timeless legend of King Arthur to the screen in visually elaborate style. An epic tale steeped in magic, EXCALIBUR chronicles the life of Arthur beginning with his birth and ending with his climactic battle with his illegitimate son, the evil Mordred.

It's All About Love (DVD)
$13 Super Savings
Add to Cart