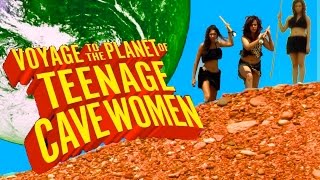 Director, actor, editor, cinematographer, and special effects artist Joshua Kennedy created Voyage to the Planet of Teenage Cavewomen during his senior year of high school. Filming on the Texas/Mexico border, he used a cast composed of his classmates and teachers. The young auteur was influenced by badly-dubbed Italian science fiction films such as Assignment: Outer Space (1961) and Voyage to the Planet of Prehistoric Women (1967), as well as Amazon epics like Cat-Women of the Moon (1953) and Fire Maidens of Outer Space (1956). Teenage Cavewomen displays the same affection for the horror and sci-fi films of years past as Josh's previous releases, Attack of the Octopus People (2010), Curse of the Insect Woman (2011), and The Menace with Five Arms (2013).

Voyage To The Planet of Teenage Cavewomen: Twin planets, their orbits unhinged by atomic war, hurtle toward the Earth at a terminal velocity. A team of crack astronauts, led by Captain Matt Sullivan, is sent to evacuate the doomed worlds before nuclear missiles obliterate them. Arriving in an experimental spacecraft, they find two races locked in combat, the sultry teenage cavewomen of Vigus and the radiation-poisoned Bavans. With only 39 hours before total destruction, Sullivan's team must find a way to end the interplanetary conflict before it's too late. Starring Joshua Kennedy. Directed by Joshua Kennedy.

Bikini Planet: A new planet is discovered in Earth's solar system. A diverse team of astronauts hand-picked by the heroic Flash Rogers is sent to investigate. They discover a world where high amounts of silicon in the atmosphere have created a race of scantily-clad Amazons with voluptuous physiques. But with supplies dwindling, these atomic superwomen plan on harvesting the Earth for its silicon -- before their heavenly bodies go flat!

Director Derek Zemrak began his career inspired by the work of Edward D. Wood, Jr., with the horror feature Ice Scream (1997), starring Wood alumnus Conrad Brooks (Glen or Glenda, Plan 9 from Outer Space, The Sinister Urge). Conrad appears in Bikini Planet as the Vice-President of the United States. Bikini Planet offers a rare comedic role for "Scream Queen" Stephanie Beaton, who has starred in such horror films as The Evilmaker (2000), Evil in the Bayou (2003), and the Witchcraft series (1997-2000) Richard Van Vleet, who provides a hilarious impersonation of Bill Clinton, played Dr. Chuck Tyler on All My Children from 1975 to 2005.

Customer Rating:
Based on 100 ratings.

Write an online review to share your thoughts with other customers.


Voyage To The Planet Of Teenage Cave Women (2012)
Joshua Kennedy pays homage to the foreign science fiction movies of the 1950s and 1960s in this enjoyable romp, scripted by Kennedy and Rock Baker with many a knowing nod to those foreign fantasy epics. Just as Roger Corman repackaged the Russian film Planeta Burg as Voyage To The Prehistoric Planet after adding new scenes to it, Kennedy approximates that approach by filming wrap arounds with American characters and then completely redubbing the rest of the movie (often comically out of sync) to represent the imported content.
Filmed during Kennedy's late teen years in his home state of Texas, the young filmmaker found a pretty terrific rocky landscape to approximate the alien world his astronauts visit, and populates it with the young beauties in his cast, staging perilous scenes and heightening the menace with terrific score cuts from the films of composer Herman Stein. Although the special effects are elementary, they recall the same techniques used in those films of long ago, including a giant mock-up of a ravenous alien spider that tackles its victims, and an immense projection of a real-life lobster.
Kennedy and Baker's screenplay reflects a vast knowledge of the genre, incorporating romances for the astronauts, a savage catfight among two cave women, dated sexist comments that help age the film to the proper period, and launching the film with a scientific explanation by an esteemed scholar (played by Ralph Haskins), approximating Dr. Frank Baxter's prologue in the 1956 thriller The Mole People.
As in his past films, Kennedy recruits his friends and classmates to play the supporting characters, with Aguilar a hoot as a fellow astronaut with eyes for one of the young ladies, and Moralez perfectly deadpan as the mission's doctor. Gomez is cute as the cave women's queen who doesn't hide her attraction to Kennedy's character very well, and Viviana Rodriguez impresses as a noble soldier to the queen. Several others in black clothes and dark glasses effectively play the villainous Bavans, who in another knowing reference, when robbed of their shades, have their eyes bulge into ping pong balls, like those worn by the hostile aliens in 1954's Killers From Space.
Yes, it's a student film made for fun starring high-schoolers, but that doesn't mean it's not entertaining, or lacks the power it most definitely holds as a homage to the genre, and an affectionate kind-spirited tribute. Kennedy's talent in the editing room shines through again, and the photography by his sister Kat (billed as "In SuperColorScope"), duplicates the tinted sequences of movies like The Angry Red Planet, another visual treat for fans. While Kennedy has made several films since, none has quite had the epic scope of this one, but hopefully another sci-fi saga is in his future.

93%off
Prevention Fitness Systems: Shortcuts to Big Weightloss
99¢ on Sale
Add to Cart
(10+)